J-10 was celebrated in an episode of Chasing Classic Cars (S13 E06) in which Carini brought the car to the 2018 Amelia Island Concours d’Elegance following an extensive restoration. “We were filming with the car, and we got stuck in traffic.” Carini noted, recalling some memorable moments. “It overheated on the side of the road, and we caused quite a commotion in front of the hotel.

“One of the other best parts was when I put my grandson in it at five years old. I said ‘Boy, these will be pictures you’ll remember forever.'”

The car features a diverse history with many storied drivers including Peter Revson, Jack Brabham, George Follmer, David Hobbs and Vic Elford all finding themselves behind the wheel at one point or another. A four-year restoration of the car was completed in 2017 to 1967 Le Mans specifications and livery and it boasts a 427 CI OHV V-8 engine, twin Holley 4-barrel carburetors, and a T-44 4-speed manual transmission.

Carini admitted he was sad seeing the car go. “I was sitting in it when we pushed it onto the trailer to go down to Florida a couple days ago. I’ve got one more chance when I drive it on stage and that’s probably going to be it.”

Like many collectors, Carini is hoping the car finds a great home and that the history lives on. “A car like this tells the story of Ford GTs and how they came about. We’ve got a good spot on Saturday afternoon, so we’ll see what happens.”

More information about the car including its rich history, can be found HERE.

In addition to the GT40, there are a plethora of notable vintage racers on offer at Mecum Kissimmee 2023:

Driven by Dan Gurney to second place in the 1968 Indianapolis 500, Eagle Chassis 404 has a storied past including three IndyCar wins in 1968 with Gurney at the helm and three Indy 500 appearances in subsequent years.

The car has been meticulously restored by six-time Indianapolis 500-winning car builder and Leader Card Racers chief mechanic A.J. Watson to its 1972 Indy 500 specifications and Livery. More information about the car can be found HERE.

Built in April 1959 and delivered new with center-seat adaptation to Christian Goethals of Belgium, Chassis 718-028 boasts a win at the 1959 Leopoldville Grand Prix in the Belgian Congo and two overall victories at the Lance Anvers hillclimb in Belgium.

The car has been part of the Rick Grant Collection since 1990 and is restored with vintage racing in mind. More information about the car can be found HERE.

Receiving a First Place Award at the 2005 Amelia Island Concours d’Elegance and most recently displayed at the Lemay Car Museum in Tacoma, Washington, from 2021-2022, this Charger Daytona was personally inspected by Bobby Allison who verified its authenticity in a handwritten letter dated November 10, 1999.

It features a 426/650hp Hemi engine built and dyno tested by Dick Landy and was restored in correct red and gold Coca-Cola No. 22 livery after being discovered in a barn by Pat McKinney. More information about the car can be found HERE.

The car has campaigned at events globally including the Silverstone Classic and the Philip Island Classic. More information about the car can be found HERE.

Driven by former Indy Car champion Chuck Stevenson in the 1964 Indianapolis 500, Watson Chassis 022-7 (the final Watson roadster built that still exists today) was never a winner but enjoyed some success on the USAC circuit in the late ’60s.

The car was restored by noted expert Bob McConnell, who owned the car for a time, and has participated in a number of vintage events in recent years. More information about the car can be found HERE.

Campaigned by Newman-Haas Racing, Mario Andretti scored Indy Car wins with it in 1984 at the Meadowlands and Mid-Ohio. More information about the car can be found HERE.

Additional information about the auction including schedule, ticket and bidder information can be found HERE. 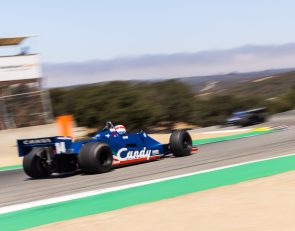 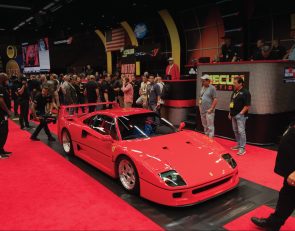