A carefully researched and well-illustrated new Indianapolis Motor Speedway Museum exhibit honors the 43 drivers who at least once finished second in the 500 but never won the race opened this week.

Winning the Indianapolis 500 is a triumph limited to only a few. Over its 110-year history, 43 men were mere moments from claiming that triumph, never adding their name and likeness to the Borg-Warner Trophy. Five are still in pursuit.

Those 43 are the drivers honored in “Second”, an exhibit featuring six major themes—accomplishment, controversy, determination, heartbreak, mechanical, and redemption. All 43 were placed within a theme based on their race attempts, racing careers, or future in racing.

“We spend a great amount of time celebrating the winners of the Indy 500—which we should—but these 43 drivers are so accomplished in their own right that we wanted to recognize them,” said Jason Vansickle, Vice President of Curation and Education. “You hear drivers say how hard it is to win in Indy, and these stories showcase how much of an achievement it is even to finish second.”

This is the largest number of drivers ever featured in one exhibition at the IMS Museum, with a lineup including Tony Bettenhausen, Eddie Sachs, Dan Gurney, Michael Andretti, Scott Goodyear, and the most recent runner-up, Pato O’Ward.

All of these drivers had and have race wins, championships, and successful careers, but remained runner-up at the Indianapolis 500 mile race.

“The idea of ‘almost’ or ‘what if’ resonates with everyone,” said Joe Hale, President of the Indianapolis Motor Speedway Museum. “As you wander through the exhibition and take in these stories, we can’t help but relate to wondering how our lives might be different if we had gotten that job or won that prize. With ‘Second,’ we continue to find new ways to tell the stories of the Indianapolis Motor Speedway.”

The exhibition includes 19 cars—13 from outside the Museum’s collection. Numerous artifacts, such as the Astor Cup, Davy Jones’ 24 Hours of Le Mans trophy, Paul Tracy’s 2002 Indy 500 suit, and Tony Bettenhausen’s 1951 helmet, are on display. Additionally, guests can utilize interactive tablets to learn more about each driver through storytelling, images, and video. Guests can learn about their Indianapolis 500 race(s) and their careers outside the Indianapolis Motor Speedway.

“Second” is the fifth exhibition the Indianapolis Motor Speedway Museum opened in 2022. Admission is free to members.

**And for more information on authors Joe Freeman’s Gordon Kirby’s Racemaker Press hardcover “Second to One: All But for Indy” detailing the lives and racing careers of these Indy 500 runner-ups, click HERE. 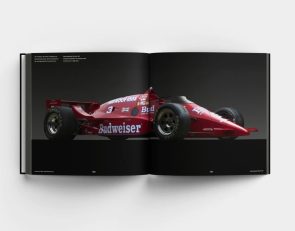