Different issues of Vintage Motorsport have appeal for different reasons, for me the fact I’ve been around the sport for so many years now I can find something that trips my memory switch.

July/August 2014 (which I recently “re-discovered” and got to spend time with) holds special appeal and is an issue of VM I expect to hang on to even as I (only semi-successfully so far) seek to cull the 1970-to-present book and magazine herd in my home office.

Bob Tullius was my boss for three years in the late 1970s, an experience that changed and enriched my life forever; and so of course the second thing to grab me about the July/August 2014 issue (first being the silver Sauber prototype cover image, of course) was the “Bob Tullius’ My Favorite Race” cover blurb.

The story, masterfully penned by John Heimann, zooms in on the 300-mile Trans Am race in the series’ second season, 1967, and is an accurate picture of Tullius’ love/hate relationship with the SCCA’s flagship (on/off/on) pro series.

Never given proper credit for his sensational victory in the first ever Trans Am race at Sebring in 1966 and the rug pulled out from underneath the factory ride he was all but assured of for 1967—both matters addressed in Heimann’s feature—Tullius rebounded with a brilliant and unexpected win at Daytona.

The weekend was not without challenges. Tullius’ overcoming them all stands as a testament to the herculean perseverance for which he is known (and which today, at age 91, at his desk every day in his Group 44 Aero hanger/museum, he still evidences).

There’s a lot more here: The Sauber C9 cover car which carried Mercedes-Benz to a stunning 1989 victory in the Silver Arrows’ return to Le Mans was brilliantly photographed for this issue. And it provided the background for some of the best writing ever by Ted West, as much the torment and terror of the Sarthe circuit’s Mulsanne straight as an engine and chassis retrospective.

Mulsanne ruminations, though, tee’d up the next barrage of very personal memories: Though as a teenager I knew very little about le Vingt-Quatre Heures du Mans, I vividly remember “Le Mans”, a mind-blower of a 1971 movie. The memories came flooding back gorging on the previously unpublished William Edgar interview with Steve McQueen in this issue.

I must dig the DVD out of the office rubble.

On a sad note, World Champion driver, constructor, dad and granddad Jack Brabham died at age 88 in May 2014, and David Colman wrote a worthy obituary for this issue, acknowledging Sir Jack’s three world championships, 14 Grand Prix wins and the great success of his Motor Racing Developments. His successes were all before my time, though I will never forget watching the drama of the 1970 Monaco GP on “Wide World of Sports”—44-year-old Brabham’s last corner accident that gifted the win to eventual World Champ Jochen Rindt.

Similarly a bittersweet read for me was Jeff Allison’s “Back in the Day” column remembering the late Peter Revson, killed 40 years before in testing for the 1974 South African GP. Revson was one of my earliest heroes—an American in Formula 1, and one of the more successful—and his death especially hard to take. The phrase “heir to the Revlon fortune” accompanied all the stories about him in the early 1970s, and Allison gives that “fact” a solid tweak.

There is also the Jim McCraw feature “Pushrod!” and who could forget 1994 and one of the most incredible Indianapolis 500 sagas of all time, a race win starring two of the motorsports world’s heaviest hitters, Mercedes-Benz and Roger Penske, as well as upstart Ilmor Engineering.

Much more in this issue, good for a rainy fall afternoon. If it’s not already buried somewhere in your office or den, back issues are available. 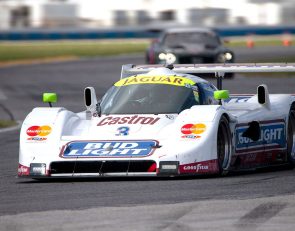