An estimated 440,000 spectators packed into the Texas venue were rewarded with virtually non-stop action from the Masters Endurance Legends USA and Masters Historic Single-Seater machinery of decades past.

In a bumper grid that combined Masters Racing Legends USA and Masters Formula Atlantic Plus, Jamie Constable was the class of the field in his Benetton-liveried Tyrrell 011B pace-wise. However, in Sunday’s race he had to share victory with Cal Meeker (Tyrrell 009) after a controversial encounter.

Constable resisted the threat posed by his rivals in Saturday’s Race 1 to claim victory, ahead of Meeker and Jonathan Holtzman (Lotus 87B), while Steve Cook won the Formula Atlantic section of the race in his Chevron B27.

In Race 2, a Safety Car period turned the race on its head: A charging Holtzman had attempted to pry the lead from Constable through the uphill Turn 1 hairpin, but as they exited the corner the cars collided. Constable was pitched skywards and his Terrell was damaged when it came back down to earth, leaving the Briton crawling to the sidelines and out of the race.

Meeker snuck through in the drama to take a lead which he would not relinquish. Holtzman settled for third but was later deemed responsible for the incident and handed a 30-second time penalty, relegating him down to 18th place in the final classification.

Meeker was joined on the podium in Race 2 by Bud Moeller (Williams FW08) and Lee Mowle (Lotus 78), who had an enthralling battle for the final podium position. Behind the leading representatives, it was line astern in Race 1 and Race 2 for Ron Maydon (LEC CRP1), Gray Gregory (March 761), Dan Collins (Lotus 91), Doug Mockett (Penske PC4), Richard Griot (March 741), Steve Cook, who again won the Masters Formula Atlantic Plus division, and Danny Baker (Ralt RT1). These drivers filled out positions six through 12 in Race 1 and each moved up two positions in Race 2 to complete the top 10 in the aftermath of the Constable/Holtzman clash.

In Masters Endurance Legends USA, it was an inch-perfect weekend for Pescarolo LMP1 driver Jamie Constable, who recorded pole position and took victory in both Race 1 and Race 2. Behind the Englishman, the racing was frenetic as different faces appeared on the podiums. In Race 1, Mirco Schultis (Oreca FLM09) and James Sofronas (Audi R8 LMS) joined Constable on the rostrum, while in Race 2 the winner was flanked by Alexander Berg (Elan DP02) and Travis Engen (Audi R8 LMP1).

Engen’s podium was only assured on the final lap as the charging Dante Tornello (Coyote Corvette), a fine fourth in Race 1, spun through the hairpin, relegating him down to seventh in the final reckoning. Schultis followed up his podium with fourth in Race 2 while Sofronas had to make do with sixth place, behind George Kurtz (Mercedes Benz AMG GT3), who improved three positions compared to Race 1.

Danny Baker (Oreca 03 LMP2) followed up a sixth with an eighth while Cal Meeker (Spice GTP) and Tim Day Jr (Ligier JSP3) put on sterling recoveries in Race 2 after Race 1 setbacks to round out the top 10.

MHR returns to action this weekend with the European season finale—the Oct. 28-30 Algarve Classic Festival at Portimao, Portugal—before wrapping up the season with an epic endurance doubleheader, the HSR Classic races at Daytona (Nov. 1-3) and Sebring (Nov. 30-Dec. 4). 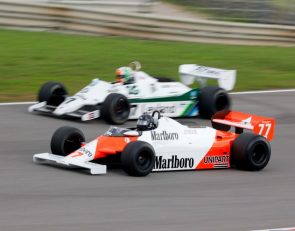 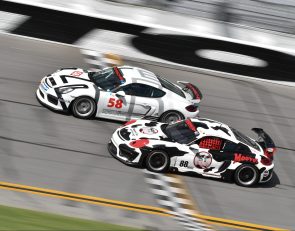