Nearly 170 race cars representing 14 classes were gathered for the event, with several in their midst telling the story of Shelby American and designer Peter Brock, both the cars and the man event honorees.

Nearly two dozen Vintage Indy cars took to the track in multiple sessions, with motorsports legend Al Unser Jr. driving the Indy 500 pace car, while also on track and on display were Ferraris spanning many eras.

Among the more memorable weekend moments were Unser Jr. being reunited with the 1986 Domino’s Pizza Shierson Racing Lola Indy car that he once raced and Brock getting a chance to drive one of the Shelby cars he designed.

“We’re very pleased with the American Speed Festival weekend,” said Tim McGrane, CEO of M1 Concourse. “Fans enjoyed seeing race cars doing what they were designed to do with two days of time trials on the 1.5-mile Speed Ring of Champion Motor Speedway. On Sunday they enjoyed the new automotive art show as part of the Speed & Style Expo. Guests also lined up to get a high-speed ride with an M1 professional driver on track and enjoy even more cars on display.”

Peter Brock was honored that evening as Master of Motorsports for his ground-breaking design innovations in the racing world. “We were so honored that [he] was here with us for all four days,” said McGrane.

In addition to receiving his award Saturday night, he met with fans throughout the weekend and took part in in two Insider’s Garage discussions with renowned author/driver David Hobbs.

For photos of the winners, click HERE.
NOTE: The next American Speed Festival sponsored by Comerica Bank at M1 Concourse is scheduled for Sept. 29- Oct. 1, 2023. 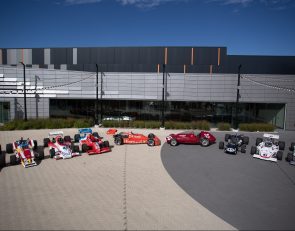