Working out of my home office these days, I am more covert than Valerie Plame. It’s my personal escape from the “nanny” society we now live in. I have everything I need here, save for a “Beam Me Up Scotty” machine, to escape the global warmest gas bags living on government grants corrupting science for political gain, telling how to live and what the weather will be like 50 years from now. Sure.

Beam machine aside, I look around at the electronic gear in my office and think about how different today’s magazine production is from when I first turned out a newsletter for a 4-wheel-drive club I was a member of in the mid-’60s.

Besides computers, scanners, satellite dishes and wi-fi in my office, I can dive into a treasure trove of automotive/motorcycle books, periodicals and thousands of photos that I’ve taken over the years—important research material. More than that, it’s a way to connect with some great old memories under the warm glow of soon to be outlawed incandescent light.

Recently I came across a couple of sheets of images from the October 1979 USGP at Watkins Glen. Back then, I ran an advertising agency and one of our big accounts was a helmet and safety equipment manufacturer. The client wanted me to attend the race.

My then girlfriend, Karen (now my wife), was looking forward to seeing an F1 race and we were tying it in with a visit to my Pennsylvania hometown and some old friends, one of whom we hooked up with for the drive up to The Glen. The air was crisp, fall colors were at their peak, pumpkins adorned doorsteps and the smell of wood smoke was in the air.

Driving north, the weather grew increasingly dismal and the rain occasionally turned to flurries. And once at The Glen it was no different, the only question being if it would snow or rain for the race. With a press/photo credential I roamed the pits where F1 team members were dressed in raincoats and bluejeans. How different from today’s F1 scene.

Jody Scheckter had already sewed up the World title, but I wanted too see Gilles Villeneuve put his Ferrari 312-T4 sideways in the toe of the boot. Mario’s Lotus 79 was a nightmare and the Williams FW07s were strong, with Alan Jones, winner of four of the previous five races, on pole. Teammate Clay Regazzoni was very approachable, and I chatted with him on the pitwall, as he joked with his mechanics.

At one point my lady Karen had walked past without saying a word, and Clay stopped the conversation to have a long look. I said nothing as he resumed our discussion about the challenges of racing around The Glen in the wet, he talking me through an imaginary lap in very entertaining fashion.

About the time Clay finished, Karen walked up half frozen, asking me for the keys to the rental car so she could get warm. Clay was slightly surprised and he looked at me and we both smiled. He knew he’s been busted for checking out my lady, and still smiling, I shook his hand and wished him well in the race.

Everyone started on wet tires, even though the rain had stopped. The real drama was between Jones and Villeneuve, each vying for second place in the title chase. I knew they’d battle hard.

Through a blinding water spray the race got underway, with Villeneuve grabbing the lead. Several drivers spun off early, and even Regazzoni crashed after running third.

Clay had returned to the pits and waved me over to yell that Jones was about to pit for slicks. I took a position, readied my camera and in came Jones. The Williams raised up on jacks, slicks went on and the right rear tire man had difficulty with the wheel nut. I clicked the shutter. Clay (dressed in red in the photo above) and the wheel man protested loudly as the car came off the jacks and Jones screeched away.

Jones didn’t make another lap before the wheel fell off, his race over and hopes for a runner-up in the championship dashed. Villeneuve won and so did I, just because I shared a few personal minutes with a driver whom I admired and who had good taste in women. 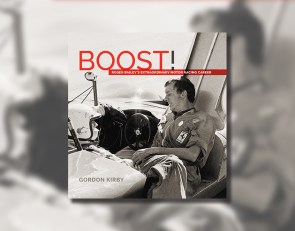 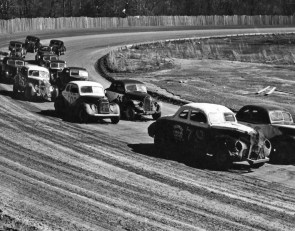