One of the world’s largest collections of Indy cars is being presented for auction by RM Sotheby’s.

The immaculate lot of vehicles owned by the late Carl Haas and his wife Bernadette is comprised of 40 cars, many of which earned championships in the CART IndyCar Series, Champ Car, and won races in the modern NTT IndyCar Series.

In addition to the myriad of Lolas, Panozes, and Dallaras, RM Sotheby’s auction includes nine of the ultra-rare Swift-Cosworths raced by Newman Haas from 1997-1999, like the two 009.c chassis seen here, with Michael Andretti leading teammate Christian Fittipaldi at Belle Isle in 1998. Motorsport Images

Many have been kept in top condition with the chassis setup from the cars’ last events and the books from those events.

The range of Lolas, Swifts, Panozes, and Dallaras will go up for bid on October 29. Included among the Indy cars are racing helmets, racing suits, trophies, artwork, and more from the powerhouse team based in Illinois. 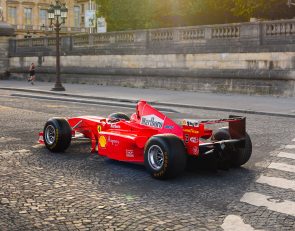