There was close racing throughout all the groups, but the John Morton Cup contingent were on another level.

Sunny skies and low 60s temperatures greeted racers and guests visiting the dry lagoon which made for some fantastic racing theater throughout the weekend. The nine run groups each had a morning and afternoon session on Saturday and Sunday with the Laps for Laguna charity rides taking place just after lunch each day as well.

Charity rides were among the weekend highlights with 68 happy faces taking hot laps around WeatherTech Raceway Laguna Seca in wide variety of vintage race cars – after making a charitable donation, of course. As a result, approximately $25,000 was raised from the charity rides alone. A full donation figure will hopefully be available for the race report in the July/Aug issue of Vintage Motorsport.

Peter Mikhail gets this charity rider situated in his 1964 Lotus 7.

Please keep your arms and legs inside the vehicle at all times – Thank you.

CSRG event official Anna Stewart was elated for her turn in the passenger seat of Jim Alder’s 1952 Jaguar XK 120 OTS.

“Hop on in there” is what I can only assume Dave Hagan is saying regarding to a ride in his 1967 Porsche 910.

It was at this moment I realized I will never be as cool as Ned Spieker, hanging his elbow out the window of his 1961 Ferrari 250 GT SWB, about to make someone’s weekend/month/year…?

Capturing the memory via pixels before making it on track is Tyler Hagan, this beautiful 1960 Porsche 356 roadster, and a lucky rider.

Saturday night, the Foundation hosted a charity dinner featuring LSRF Director, Emeritus – Danny Sullivan. The event pavilion on top of the front straightaway hill was the location for drinks, dinner, and a conversation with Sullivan about his famous “Spin and Win” Indy 500 in 1985.

Mario Andretti even made an appearance (via phone) in which he hassled Sullivan about “exceeding track limits” with his pass for the win. A fun surprise for all in attendance and certainly a night/weekend to remember.

The definition of side-by-side during the Crossflow Cup’s Sunday morning warm-up session.

LSRF board member Martin Lauber worked his tail off making sure the event (and Saturday night dinner) went off without a hitch. He also managed a P2 finish in Sunday’s Crossflow Cup Formula Ford Feature, while capturing the fastest lap.

Max Jameisson readies for the Corkscrew drop in his 1935 Ford Sprint Car.

Adin Stein was fierce behind the wheel of his 1964 MGB all weekend and nabbed the win in Sunday’s Group 2 Feature.

See you next year!

For more information about CSRG including the remainder of their schedule click HERE.

More information about the Laguna Seca Raceway Foundation including donation information can be found HERE. 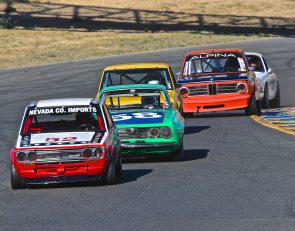 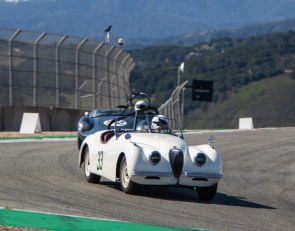 Laps for Laguna aiming for the spectacular, on and off the track 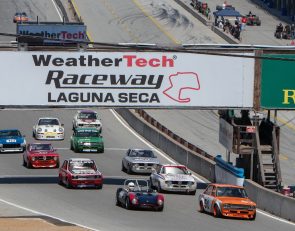