Barrett-Jackson has announced that American businessman and philanthropist George Shinn will auction a select offering from his expansive collection with No Reserve during the 2022 Palm Beach Auction, April 7-9, at the South Florida Fairgrounds.

A diverse curation, the offering from the George Shinn Collection in Palm Beach will include more than 30 vehicles comprising originals and Resto-Mods spanning from the 1950s to the early ’70s, as well as hot rods and modern sports cars.

“Coming on the heels of Barrett-Jackson’s most successful auction in its 50-year history, we’re excited to roll into our highly anticipated return to Palm Beach with several remarkable collections,” said Craig Jackson, chairman and CEO of Barrett-Jackson. “We’re thrilled to feature the George Shinn Collection as part of that. Like myself, George has been passionate about cars since he was a child, and he has amassed an impressive collection over the years. His select offering in Palm Beach is reflective of the incredible quality and diversity featured throughout.”

Among the Shinn Collection highlights are 1958 Chevrolet Corvette 283/250 convertible finished in Charcoal Pearl with a fuel-injected V8 engine mated to a 4-speed manual transmission and 1957 Ford Fairlane Sunliner powered by the 321ci Thunderbird Special, a version of Ford’s Y-block V8 engine, equipped with a 4-barrel carburetor and dual exhaust mated to a 2-speed Ford-O-Matic automatic transmission

“The quality of the work and craftsmanship that went into restoring and building many of the cars in George’s collection is second to none,” said Steve Davis, president of Barrett-Jackson. “It is truly a remarkable collection, and I look forward to seeing many lucky Barrett-Jackson bidders take home these pieces of automotive history as they cross the auction block with No Reserve in Palm Beach.”

Shinn is the founder and original owner of the NBA Charlotte Hornets. Since selling his NBA team, he has devoted much of his time to charitable work in the United States and around the world, and this year has designated all proceeds from his 2009 Ford Shelby Mustang Super Snake signed by Carroll Shelby to Samaritan’s Purse, a humanitarian aid organization providing disaster relief and emergency medical care in Ukraine.

For more information on the Palm Beach Auction, click HERE. 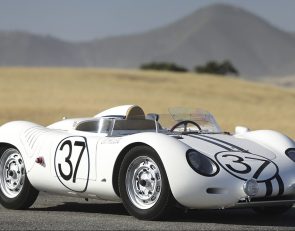 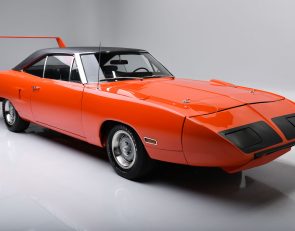