Many of the first “official” post-war Sports Car Club of America events were held at Thompson Speedway and featured racing machinery as varied as a Type 51 Grand Prix Bugatti, a Mercer Raceabout Series 4, a Hudson Complex, and a Bugatti T57 Atalante coupe. A July 1945 field at the Connecticut road course was rounded out with some unlikely race cars, including a Rolls-Royce Phantom 1 Ascot Phaeton, a Rolls-Royce Silver Ghost, an Austin Seven, and a Cord sedan.

Not surprisingly, George Weaver’s Type 51 Bugatti was the fastest car at that meet.

Three more SCCA events took place at Thompson in 1947 and 1948, with an equally odd collection of race cars and sports cars competing in timed events, match races, and pursuit races. The entries skewed toward large-bore, prewar cars, coupled with a growing number of MG TCs.

In October 1948, George Weaver dusted off a prewar ARCA race car that he’d purchased in 1947 from its original driver/mechanic, Lemuel Ladd. Weaver had assisted Ladd in the car’s construction in 1935. Originally called the Reuter Special, then the Ladd Special, the car came to be known as the “Old Gray Mare” under Weaver’s ownership. Despite its inauspicious beginnings in the mid-1930s as an American car built from junkyard parts, the OGM proved to be virtually unbeatable at Thompso in ’48 and ’49.

SCCA officials were no dummies, and they quickly realized that there needed to be some competition to keep entries and interest alive, so in June 1949 they returned to the prewar ARCA practice of running separate classes for cars with different displacement, to make sure the Old Gray Mare didn’t win everything.

(For perspective, the Old Gray Mare won races with George Weaver driving, with Hal Stetson at the wheel, with Bill Leith driving, with Joseph Bradford in the driver’s seat and even took the first “ladies’ race” with Betty Bradford at the wheel.

Abbot Lahti in his “Croslahti B Special.” (Sports Cars In Competition)

So…a new class was added for cars under 1500cc, creating a place for all those MGs which ruled the smaller classes to the end of the 1940s. But it wasn’t long before cars with even smaller displacement engines came out to play. In April 1951, Abbot Lahti of Wolfeboro, New Hampshire, built a sports/race car called the Croslahti out of a 1947 Crosley sedan with a modified Crosley engine. He started with a COBRA engine, but wisely switched to a CIBA engine for his Croslahti B. Its claim to fame was an unofficial under-30s lap of the Thompson half-mile besting runs made by “Cad-Allards and many other sports jobs with many times the displacement” Sports Cars In Competition reported in 1952.

Hal Stetson in his Crosley, the “PBS Special.”

In July 1951, Hal Stetson, one of the many drivers of the Old Gray Mare, brought his Crosley Special to Thompson, winning the quarter-mile and the race in Class 7. By April of 1952 there were five Crosley-powered entries in Class 7 (three specials, and two production cars). Later that year the Crosleys—along with Siata 300BC 750 Spyders—were running in Class 8.

In 1953, the SCCA recognized the H Modified class, and the floodgates opened: Crosley specials, Bandinis, Giaurs, Siatas, and the occasional Nardi all showed up to compete in HM.

Is it possible we can put the “blame” on all the H-Modified madness leading up to DSR on a Flathead Ford-powered Old Gray Mare?…

More tales of historic derring do on the H-Modified Racing Club blog HERE. 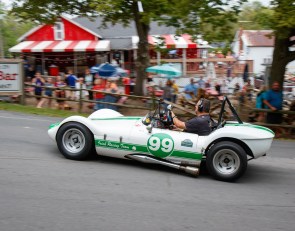 Small Engines, Big Plans: H-Modified Racing Club Will Be on the Move in 2022 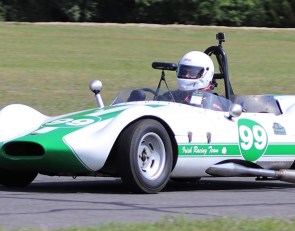