Next year’s Put-in-Bay Vintage Sports Car Races will be held Tuesday-Friday, Sept. 20-23. The venerable event takes place on Ohio’s South Bass Island where small-bore sports cars raced through the streets of the village of Put-in-Bay from 1952 to 1959 and one last time in 1963. Beginning in 2009 with a modest “reunion” then real racing in 2012, today’s vintage races take place on a challenging 1.2-mile hay bale-lined course at the island’s airport.

Featured marques for the 2022 event will be MG and Triumph, and the event will be an official MG Vintage Racers “Focus Event” meaning that group will pull out all the stops to entice MG drivers from far and wide to make a special effort to come and enjoy the “holy grail of old school vintage sports car racing.”

Ohioan Robert Wheaton (No. 53 MGA) on the grid for the 1958 F Production race. (John Atkinson photo)

“2022 will mark 70 years since the first Put-in-Bay Road Race back in the fall of 1952 when most of the entries were MG TCs and TDs,” explained long-time PIB event coordinator and MG racer Manley Ford. “[But] by the mid-‘50s, Triumph TR2s and TR3s became the preferred British entry, dominating E production, so it just made sense to add the TRs into the mix for 2022. Should be a blast!”

Following the event’s traditional pattern, Tuesday, Sept. 20, will feature an all-entrant’s car show and tours of the original 3.1-mile road course. Racing will take place on Wednesday and Thursday at the Put-in-Bay Airport. Sprinkled throughout are numerous social gatherings and the not-to-be missed “rocker cover races”.

Renowned for its unique island setting, relaxed atmosphere and “competitive but respectful” race environment, one entrant recently remarked, “It’s like they threw a party and a race broke out.”

Look for registration to open in early January 2022, and stay tuned to www.pibroadrace.com 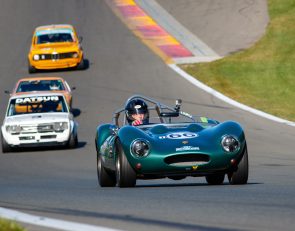