On October 21, Bobby Rahal personally delivered his 1986 Indy 500-winning March 86C to the Indianapolis Motor Speedway Museum. There it will join the more than 25 other winners on display, spanning the entire 107-year history of the storied Memorial Day event, often including a 1911 Marmon Wasp, 1922 Duesenberg, 1928 Miller, 1938 Maserati, 1948 Blue Crown, 1960 Watson, and others.

The IMS Museum is also home to the Borg-Warner trophy, the annual prize for Indianapolis 500 victors. The trophy features the silver-sculpted likenesses of each winner since the first race in 1911, stands more than five feet tall and weighs 110 pounds.

This expansive section of the exhibit also features historic race programs and memorabilia, bricks from the original 1909 track, helmets through the years, and pieces from our beautiful silver trophy collection, including the personal collection of Rudolf Caracciola.

The Indianapolis Star’s Nathan Brown reported that “after nearly a year-long concentrated effort to acquire the No. 3 car – and more than 20 years of waiting overall – the museum has a new car that’s here to stay. On Oct. 21, the museum announced it had purchased Rahal’s lone 500 winner from longtime private owner Pat Ryan, making it the 35th permanent member of the museum’s Indy 500 winning car collection, and the first it has acquired since 1999, when it landed Jacques Villeneuve’s 1995 Player’s Ltd. car.”

There were several backstories to Rahal’s victory in the 1986 70th Indianapolis 500 notably the fact it was held a week late following a Memorial Day weekend rainout; it was held on the 75th anniversary of the first 500 run in 1911; and the talented Ohioan won the race in under three hours for the first time.

Having taken the lead from Kevin Cogan on a restart with two laps to go after a long caution period, Rahal claimed a joyous-if-narrow victory for popular car owner Jim Trueman.

Sadly, Red Roof Inns founder Trueman died after a battle with cancer just 11 days later. He will be thought of by all who enjoy a close-up view of this very special March IndyCar.

For more information on the IMS Museum, including hours of operation and other cars on exhibit, click HERE. 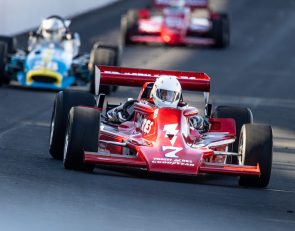 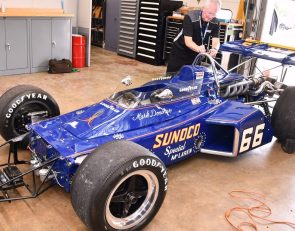