An expansive array of ultra-desirable vintage cars, race cars, motorcycles, trucks and even an Airstream trailer, are included in the inventory of the Labor Day weekend’s 14th Annual Auburn Auction, set for Friday and Saturday, Sept. 3-4, in Auburn, Indiana.

Getting top billing are two rare pre-war machines, one a purpose-built racing car evidencing the genius of American Harry Miller; the other an elegant Atlanta coupe from Ettore Bugatti.

The 1937 Miller-Gulf dirt track and Indianapolis racer (photo above) was one of two Miller racing cars commissioned by Indy 500 champ Ira Vail, now recognized as the most original survivor by Miller enthusiasts and experts.

One of the last major racing projects completed by Miller, whose health but not his engineering genius was in steady decline, the car commissioned by Vail and funded by Gulf Oil featured a 255 cid DOHC inline four-cylinder engine originally intended as an aircraft power plant.

The car was largely unsuccessful on-track, retired in 1939; but it has a nearly priceless place in the lineage of Indianapolis 500-winning Millers.

Documented by Bugatti historian, David Sewell, the car has resided in significant French collections and was the recipient of a painstakingly correct, frame-up restoration before being shown at both the Pebble Beach and Amelia Island concours.

And for a preview of the Auburn inventory, click HERE. 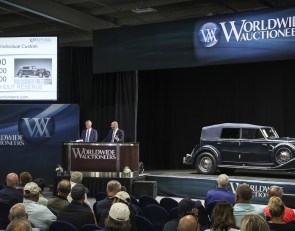