A coachbuilt Aston Martin convertible? This DB2/4 is one of two. Photo: Gooding & Co.

The Aston Martin is one of only two DB2/4 chassis built with the striking convertible body style, and is an important coachbuilt example of the marque from the early years of the David Brown era. According to factory records, chassis LML/506 was completed by Aston Martin on June 9, 1953, and dispatched to Carrozzeria Bertone in Torino on Nov. 16. While Nuccio Bertone had in-house stylist Franco Scaglione design three DB2/4 Spiders, the two Drophead Coupes built (chassis LML/504 and LML/506) have long been attributed to freelance designer Giovanni Michelotti.

The car claimed 3rd-place honors in its class at the 1955 Pebble Beach Concours d’Elegance. Following a full restoration to concours standards in 2006, the car won first prize in the Feltham Aston Class at the 2011 AMOC Autumn Concours held at Chavenage House. Part of a private collection, it has not been exhibited since then.

The Bugatti Type 37 Grand Prix is the 1.5-liter, 4-cylinder model based on the famous Type 35 intended for voiturette racing. Like the Type 35, the Type 37 provided excellent overall performance, plus it offered an increased level of user-friendliness for road-based events and rallies. Type 37s quickly became known as race-winning machines and were entered in all the great road races of the era including Le Mans, the Mille Miglia and the Targa Florio.

This Type 37, chassis 37227, spent more than 30 years with its original owner in France. It was purchased in about 1958 by New York City resident Peter Larkin, a four-time Tony Award-winning Broadway set designer who passed away in 2019. 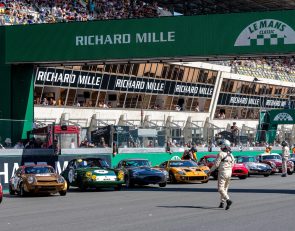