Champaign, IL – Looking at the polished industry of auto racing today, it’s hard to imagine the bygone era of its birth — a time of unprecedented American innovation and risk-taking by business entrepreneurs and hard-driving men looking for adventure, financial gain and to make their mark on a changing world.

A new book by Mark Dill immerses readers in that time by telling the story of racing’s American origins through actual historical accounts of the races, machines, drivers and other central figures who created an entirely new sport in the early 1900s — when horses and railways were still the most common forms of transportation. Boasting a forward by Willy T. Ribbs and an introduction by Al Unser Jr., the book is now available as an e-book and in print through Dill’s author website or in print on BookBaby. Print copies will be available Nov. 25 from Amazon or Barnes & Noble.

“The Legend of the First Super Speedway: The Battle for the Soul of American Auto Racing,” opens with a captivating introduction to Barney Oldfield as he disrupts an October 1902 day of toil for Detroit River dock workers when he drives his race car amidst the dock’s warehouses. The thunderous blasts from the giant engine startled and angered the workers while terrifying the horses that pulled loading carts.

That vivid description of the scene of Oldfield in his “Nine-Ninety-Nine” race machine (produced by engineer Henry Ford) is matched by equivalent authentic detail in each of the book’s subsequent chapters. It culminates with a May 1910 conversation between Oldfield, by then heralded as racing’s Speed King, and Carl Fisher — the leading founder of the Indianapolis Motor Speedway — about Fisher’s feat in building the iconic track.

To get better insight into the project, we talked with Dill — creator of the First Super Speedway website that houses the world’s largest online archive of primary research about pre-1920 auto racing history — about why he felt compelled to introduce readers to American racing’s real-life characters in his fact-based historical novel.

How did you come up with the idea for telling the book’s story?

It’s in my bones. I even thought about it as a little boy, but it wasn’t until about 17 years ago the story started to come into focus in my head. Images, personalities, cars began to coalesce in my mind. The reality is that the people in my book invented American auto racing. They developed all the infrastructure, the role of officials, tech inspection, the pace car, and of course the first true American speedway. There is so much of what they created that is in the foundation of the sport. The momentum they launched still powers the Indianapolis 500 today. When you get down to it, history is everything.

Why did you choose to take a narrative approach?

I have written a lot of traditional racing histories through articles, my website, and helping Howard Kroplick pull together his first book, “The Vanderbilt Cup Races of Long Island.” I learned a great deal and enjoyed the experience, but felt the people, like Barney Oldfield and Carl Fisher, deserved a multi-dimensional profile. I believed that was the best way to bring them to life. Barney, Carl, the IMS founders, William K. Vanderbilt were born competitors with dynamic personalities. I want readers to come away from the experience feeling like they met these people. I have studied them for so many years, I honestly believe I channeled them as real people in my book. Also, I was very concerned about the historical context and how it shaped people. I took it as a challenge to show people what it was like to live during the era. I took a great deal of satisfaction creating images that recreated the world, life, and times.

When did you first start thinking about writing the book?

I was born with it, really. Some of my earliest memories are about being mesmerized by anything going on at Indianapolis Motor Speedway. I grew up in Indianapolis so that was all anyone talked about in May. I was also born with the writing gene and a penchant for American history, especially the turn of the 20th century. Some of that was due to the fact that my grandfather was born in 1905 and I enjoyed the stories he and my Dad told about Indianapolis from decades prior. I remember as an 11-year-old boy I decided I wanted to write a book about the earliest days of the Indy 500. After spending a day in the Marion County Public Library, I felt discouraged and overwhelmed, but the desire to someday write a book about the subject never let go of me.

Was there a part of the early IMS history that was hard to uncover?

It was a discovery process because it was impossible to know what I was looking for. What was exciting was unearthing events and people nobody else seemed to be aware of. For example, the design of the Marmon Wasp began in 1909. It was built for the Speedway, but not the Indy 500. Harry “Sunshine” Stillman was actually the first person to drive it at speed. There are so many examples of facts I believe have been nearly lost to the ages, but I have brought them to the surface in the book and my website. 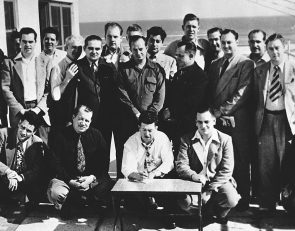