Santa Monica, CA — A selection of sports cars from prestigious European marques, including Alpine, Lancia, Lamborghini and Porsche, was just announced for Gooding & Company’s Oct. 26-30 Geared Online sale. Among the offerings are models rarely offered at public auction in the United States.

The 1970 Alpine A110 1600S was campaigned in over 150 events since 1970. Raced by noted Alpine driver Michel Bessac throughout the early 1970s, Bessac re-acquired the car in 1990 and gave the A110 a second career as a historic racer. It’s been professionally restored in correct Group 4 specification.

The 1975 Lamborghini Countach LP400 ‘Periscopica,’ one of only 158 made, has been owned by collectors in Germany and Italy before settling with its current owner in the U.S. A car rarely seen on the open market, this one features a matching-numbers engine.

The 1975 Lancia Stratos HF Stradale is unrestored and offered for public sale for the first time. 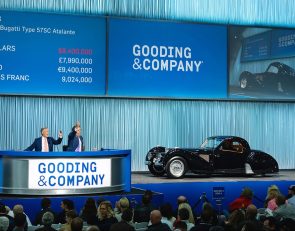