Indianapolis, IN — After selling last Friday at Mecum’s Indianapolis auction for $3.85 million, the “Flying Mustang” has topped the Bullitt Mustang (sold by Mecum at its January 2020 Kissimmee auction for $3.74 million) as the most expensive Mustang ever sold at public auction. See the top 10.

As the first R-model GT350 of what became the performance Mustangs from Carroll Shelby that ushered Ford into SCCA racing, the car was driven by Ken Miles, Bob Bondurant, Chuck Cantwell, Peter Brock and Jerry Titus during its development and testing — and went on to become one of the winningest Mustangs ever.

The car earned its nickname when Shelby developed marketing materials around a photo showing all four tires off the ground — taken at Green Valley Raceway in Texas with Miles at the wheel — with the headline, “See, our Mustangs really fly!”

5R002 went on to rule SCCA’s B-Production class for the next five years, earning 10 first-place finishes in 1965 alone. Read its full history — including how the car was found in Mexico in 1989, and how John Atzbach acquired and restored it. 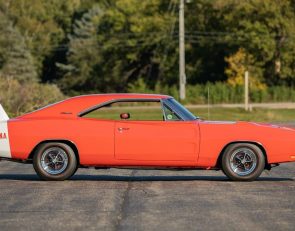 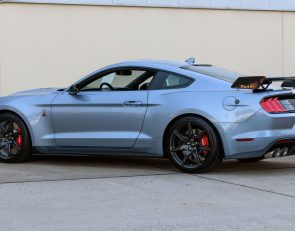