Oak Park, IL — We followed up with VM columnist and The Last Open Road author Burt Levy for the results of this year’s Buddy Palumbo Award, typically given at the Amelia Island Concours — and nearly forgotten in our upturned world since the March 8 event. Here’s Burt’s first-person report:

“I hated to miss this year’s Amelia Island Concours and especially the presentation of this year’s 14th annual Buddy Palumbo Award. But I had come down with a terrible head/chest cold (not the dreaded coronavirus, thank goodness) and, since I felt like utter crap and also because awareness and concern about COVID-19 were just emerging on the national consciousness, I decided to do the right thing and stay home. And I was absolutely miserable the whole time. Just ask my wife. But thanks to artist Richard Smyth and my friend Bill Warner and his Amelia Island Concours staff — particularly Mark Becker –the award arrived, a winner was selected and the presentation was made…albeit with its sponsor and instigator in absentia.

The Buddy Palumbo award is named after the gas-station mechanic hero/narrator of my The Last Open Road series of novels, and it’s a little different from most concours awards in that it honors a car that has been largely restored and prepared by its owner(s) rather than by a professional restoration shop or the staff of a public or private collection. It was first presented in 2007.

It’s also a bit unusual in that each year’s award is an original piece of artwork by a recognized automotive artist or sculptor. We’ve had everything from Derrington steering wheel wall plaques to oil paintings to sculptures to a stained glass piece. The concept for this year’s award was an original painting by renowned automotive/transportation artist Richard Smyth featuring the winning car front-and-center in the fictitious Westbridge Motor Car Company, Ltd. Jaguar/MG dealership’s service shop.

Richard created a mockup of the painting with a two-tone Nash Metropolitan with “Your Car Here” down the side filling in for the yet-to-be-selected winner, and it was duly framed and sent off to the concours office prior to the event. Richard had never been to Amelia and surely wanted to go, and arrangements were made for him to meet me there to take it all in and get the necessary photos and details of the ultimate winner.

When I ended up sick, Richard went down by himself and Mark and his crew made all the necessary arrangements, the mockup was duly displayed and the winner was selected. The judges picked the absolutely stunning, Pompeian Red Metallic 1960 Cadillac Eldorado Brougham owned, restored and presented by the husband-and-wife team of Don and Donna McCullen.

It was somewhat incongruous to feature an enormous, Florida-based 1960 Cadillac Eldorado Brougham on the floor of an early 1950s Jaguar/MG shop in Manhattan but, hey, that’s the nice thing about fiction: fantasy is only a pen stroke or two away!

Richard sent the McCullens an initial color rendering of their car, and some friendly back-and-forth ensued to arrive at the proper, almost black-cherry color. That settled, Richard finished the painting and sent it down to the winners, and it’s my understanding that they’re very happy with it.” 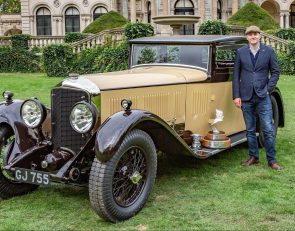 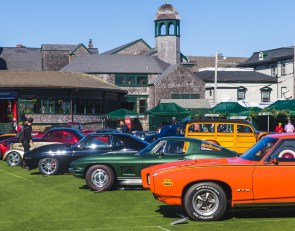