Videos: Andretti and Mirage Prepare for Le Mans in 1982

Videos: Andretti and Mirage Prepare for Le Mans in 1982

By now, you have likely seen the car that graces the latest issue (Nov/Dec) of Vintage Motorsport – the 1982 Mirage M12 that was famously pulled from the grid minutes before the father and son duo of Mario and Michael Andretti were set to pilot it at Le Mans.

A tip from a friend of VM pointed us to this four-part video series that was posted by award-winning network television broadcaster, Rick Debruhl. In 1982, Rick covered the creation and testing of the car for Phoenix television affiliate KPNX-TV. The videos are a great step back in time and we think the series is a wonderful compliment to the magazine feature.

If you’re not already a subscriber, get your copy at a newsstand near you or start your own subscription by calling 877 425-4103 or online at www.vintagemotorsport.com 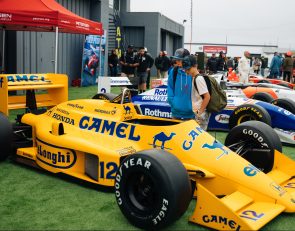