The Vintage Motorsport 2019 Nov-Dec issue kicks off with The Mirage Vanished!

the amazing 7-page Salon story of why Mario and Michael Andretti’s Mirage M12 was banned at Le Mans in 1982, just before the green flag!

And in “Prepping a Legend,” you’ll read about the effort it takes to maintain and race a legendary Porsche 917.

We explore U.S. Hillclimb’s fascinating history in “Up, Up and Away” and take a fun drive in a very rare 1953 Siata 208S Spider, these days valued at a cool $2 million in perfect condition.

And Scott Pruett’s long and stellar racing career spanned decades, but can you guess what his favorite race might be? Find out.

And folks, it’s time to set the record straight on Phil Hill, who deserves to be remembered as the rightful champion he was and is when he became the World Driving Champion in 1961. In “Hill and Von” we meticulously restore America’s first World Champion to his rightful place in F1 history, a story not to miss.

If you love motorcycles, then check out the Haas Moto Museum in this issue, read about longtime vintage racer Carl Moore and his cars and Porsche enthusiasts will love our visit to Emory Motorsports in California. And in tech, see how a fuel blend helped win Le Mans in 1997.

All of VM’s great columnists, too.

If you’re not already a subscriber, get your copy at a newsstand near you or start your own subscription by calling 877 425-4103 or at www.vintagemotorsport.com. 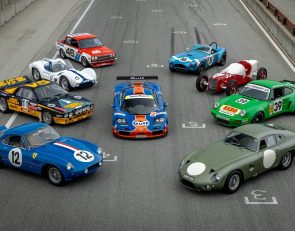