Los Angeles, CA — With the premiere of Ford v Ferrari slated for Nov. 15, the film’s studio has released a second promotional trailer for the biographical drama — a 2 hour and 30 minute look at the intense relationship between Carroll Shelby (portrayed by Matt Damon) and Ken Miles (Christian Bale).

The film follows the eccentric, determined team of American engineers and designers, led by Shelby and British driver Miles, who are tasked by Henry Ford II and Lee Iacocca with the mission of building the Ford GT40. The dream is that the new race car can finally defeat the perennially dominant Ferrari at the 1966 24 Hours of Le Mans race in France — a quest made even more lucrative to Ford after Enzo Ferrari cut off Ford’s offers to buy Ferrari’s company. 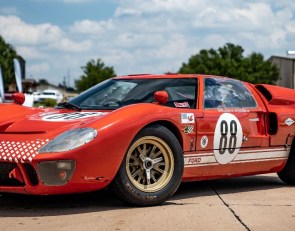