Indianapolis, IN — The Indianapolis Motor Speedway Museum is teaming up with Spotfund — a new and innovative fundraising platform that supports only 501(c)(3) non-profits — to close out the funding required to put Dan Gurney’s legendary Lotus 29/1 back on the racetrack.

The museum’s Restoration Department has been working on the car and its Ford 260 cubic-inch V8 with the goal of having it turn laps on the legendary 2.5-mile IMS oval. The museum is posting regular updates, photos and videos on its Restoration Project Facebook page.

The project got underway about 18 months ago and great progress has been made, but approximately $15,000 of the $103,000 budget required to restore the Lotus remains to be raised, and that’s where Spotfund has stepped up to help bridge the gap. Donate to the project.

The Lotus 29 represents one of the greatest technological revolutions in motorsports history; it ushered in the “rear-engine revolution” at the Indianapolis 500 after the race had been dominated by front-engine cars from the dawn of racing.

Team Lotus founder Colin Chapman brought three Lotus 29s to IMS for the 1963 race: one for Jim Clark, a second for Gurney, and a third as the test “mule.” The 29/1 was the mule, but Gurney crashed during practice and the mule quickly got a promotion. Gurney qualified the car 12th and finished the race in 7th place, while Clark finished 2nd and earned “Rookie of the Year” honors. 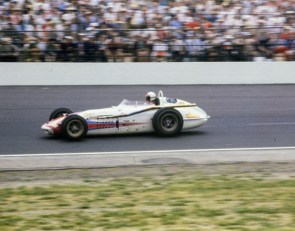