Fullerton, CA — Gene Romero, the 1970 American Motorcycle Association’s Grand National Champion and 1975 Daytona 200 winner, passed away May 12 from complications of COPD. He was 71.

Romero honed his racing skills on dirt and scrambles tracks in the Central Valley of California. As an amateur, Romero used his scramble skills to become a top TT Steeplechase Rider. Not surprisingly, Romero’s first pro finish came at the age of 19 at the Castle Rock, Washington TT in July 1966. He adopted the nickname “Burritto” with two Ts instead of the conventional spelling with one T. His first national win was two years later in Lincoln, Neb., riding a Triumph.

Romero won 12 AMA Nationals during his 16-year racing career and received AMA’s most popular “Racer Of The Year” Award. He changed the course of professional motorcycle racing when he brought non-motorcycle-oriented sponsors into the sport from outside the industry.
At the Daytona 200 in 1970, qualifying used the full oval course rather than the road course. Aboard a 750cc Triumph Triple, Romero ran a scorching lap of 157.3 mph to win the pole, a record that will forever stand since that was the last time the oval was used for qualifying.
His best quote was memorialized in the greatest motorcycle movie of all time, the Academy Award nominated documentary “On Any Sunday.” At the time, Gene needed a 3rd place or better finish at the Sacramento Mile in order to be crowned the 1970 AMA Grand National Champion. He remarked when interviewed; “I don’t want to hurt anybody, but I’ve got to get third no matter what…I’m going to get third or come see me in the hospital — I dig carnations.”
Following his retirement, Romero was hired by Honda to manage the company’s dirt track program, taking on Harley-Davidson at its own game. Honda then took home the No. 1 plate, winning four championships in a row from 1984 to 1987.
As a promoter, Romero organized the West Coast Flat Track Series, giving novice and semi-pro riders a place to race at more than 30 venues. He was inducted into the AMA Motorcycle Hall of Fame in 1998 and in 2001, received the Trailblazers top honors, their Dick Hammer Award.
He is survived by his wife Cheri and his son Geno. In lieu of a memorial service, many racetracks across the nation will be having a “Moment of Silence” in his name. And to commemorate the 50th Anniversary of Gene’s championship run, a special event is being planned for the 2020 Sacramento Mile.
Vintage Motorsport extends its condolences to the family, friends and fans of Gene Romero. 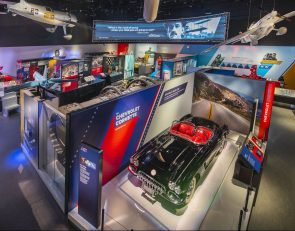 Icons of motorsports history on display at Air and Space Museum