Bowling Green, KY — To celebrate the upcoming 50th anniversary of NASA’s Apollo 11 mission and Neil Armstrong’s first steps on the moon, the National Corvette Museum — in conjunction with NASA and the Marshall Space Flight Center — will host a new exhibit, “From Gas Station to Space Station: How NASA Conquered Low-Earth Orbit.” It will open Jan. 14 and run through July 30.

“This exhibit tells the story of where that transformative moment in history has led us,” said NCM Curator Derek E. Moore. “We’ll be looking at how someone becomes an astronaut and how we landed on the moon, as well as how that is leading us into future space exploration.”

Naturally, the museum is also spotlighting the connection between the space program and America’s sports car.
It’s no surprise that people who push the envelope in performance aircraft and rockets would want to drive high-performance cars while they’re Earth-bound. For many, the natural choice was Corvette. Alan Shepard started the trend when he drove a 1957 Corvette to his assigned base for astronaut training. After Shepard became the first American to travel in space (May 5, 1961), GM President Ed Cole gave him a new Corvette to honor the accomplishment.
Many believe that GM continued to give Corvettes to astronauts, but that was not the case. It was former Indy 500 winner Jim Rathmann, later a Florida Cadillac/Corvette dealer, who perpetuated and cultivated this association by offering a $1 Corvette lease agreement to astronauts. Many of them from the Mercury Program through Apollo 12 took Rathmann up on his offer, forging a connection between Corvette and the space program.
“Rathmann just got it,” Moore said. “Being a bit of a thrill seeker himself as an accomplished race car driver, he saw Corvette as the perfect car for people who live on the edge. The sleek and fast look of the Corvette went with the personalities of the astronauts, while the power and reactive handling of Corvettes appealed to those who had been test pilots and fighter pilots. Rathmann’s forward thinking on this wound up promoting Corvette at a time when the space age was in full throttle. To honor that aspect of the story, we’re bringing in a few of those cars as well.”
“We also plan to tell the story of Betty Skelton, a real pioneer in challenging male-dominated roles,” Moore said. “Skelton set land speed records and paved the way for women in auto racing, aviation and astronautics. She was the first woman to complete NASA’s rigorous physical and psychological tests.”
Get info on museum hours and more to help plan your visit. 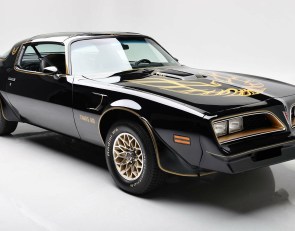