alinas, CA — While high-profile vintage racing groups such as 1967-84 Formula 1, 1966-74 Can-Am and the Historic Trans-Am anchored last month’s Rolex Monterey Motorsports Reunion, the 50th anniversary celebration of Formula 5000 put on a whopper of a show for fans and participants alike.

The F5000s platoon out for the pace lap at WeatherTech Raceway Laguna Seca. Photo: Bob Pengraph

The U.S. based F5000 Drivers Association, in league with its counterpart New Zealand F5000 Association, pulled together nearly 50 of the stock-block 5-liter V8-engined “wings and slicks” open-wheelers at the back-to-back Monterey Pre-Reunion and Reunion races at WeatherTech Raceway Laguna Seca.
Mechanical and contact attrition took its toll over the two-meet span, and by the Sunday Reunion final, 31 cars managed to make the starting grid.
Racers from the U.S., U.K., Australia and New Zealand brought an incredible array of diverse marques that contested the series from 1968-76, including Chevron, Crossle, Eagle, Elfin, Lola, Lotus, McKee, McLaren, McRae, March, Matich, Shadow, Surtees and Talon. Racing across the two weekends was close and spirited, especially among the foreigners, who nevertheless couldn’t top Yank driver Craig Bennett, who won both the Saturday and Sunday 14-lap feature races at the Reunion weekend in his 1976 Dodge-powered Shadow DN6.
Reigning Tasman Cup Revival Series champion Andy Higgins brought his 1974 Lola T332 all the way from Auckland to finish 2nd in the finale, and managed a podium 3rd on Saturday behind fellow Kiwi Michael Collins’ 1972 McRae GM1. U.S.-based Brit Kyle Tilley (1973 Lola T330) rounded out Sunday’s podium in 3rd position, ahead of an ANZAC pack running 4th to 11th, with American Bruce Leeson 12th in his 1969 McLaren M10B.
For its part, the U.S. F5000 contingent had the fourth and final round of its own championship series within the Reunion races, with the group’s president Seb Coppola taking the Class A (pre-1972) crown for the second consecutive year in his 1970 Lola T192. Leeson’s McLaren was 2nd in the championship and 3rd was taken by Johnnie Crean in his 1969 Gurney Eagle. Perennial contender Mark Harmer (1969 Surtees TS5) was sidelined in the finale due to injuries from a paddock scooter accident. With three wins and a 4th in the two weekends, Bennett took overall honors in Class B (1972-76). Tilley finished 2nd in total points and 3rd in Class B was Rick Parsons’ 1976 Lola T332C.
New Zealander Higgins noted the fans’ recognition of the group’s global gathering: “People here really seem to appreciate the effort we have all put in to get here.” Added fellow Kiwi driver Grant Martin (1974 Talon MR1A), “It’s been seriously cool; billionaires can and do spend millions buying cars to run at this meeting, yet here we are a bunch of blokes in black T-shirts from West Auckland out there mixing it up with them. It’s been fantastic…”
In a nod to the foreign contingent, Coppola stated, “I want to thank all participants in our 2018 race events and especially our friends from New Zealand, Australia and Great Britain who came from long distances and at great expense to be part of our 50th Anniversary celebration.
Famous drivers from the original series made a point to attend the meet, including the U.K.’s Derek Bell and David Hobbs, Kevin Bartlett of Australia and New Zealanders David Oxton and Ken Smith.
–Thanks to Mike Silverman for this first-person report. 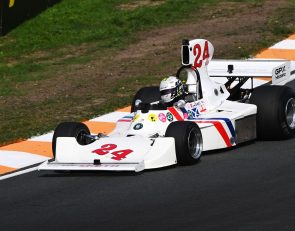