Kenton, OH — VM sadly notes the unexpected passing of longtime vintage racer and diehard Jaguar aficionado Max Heilman, who succumbed to complications of a stroke on June 20th at Riverside Methodist Hospital in Columbus, OH. He was 81. For more than 30 years Heilman participated in vintage racing from its early days, and he was a widely known and well-liked fixture in the vintage paddocks.

Max Heilman hoists the milk for a class win in his Jaguar XK150S at the first Brickyard vintage race at Indianapolis Motor Speedway in June 2014 (photo: courtesy Paul Gelpi).

A skilled fabricator and constructor, Heilman built and prepared his own race cars, and his wrenching talent and undeniable driving skills made his immaculate white Jaguar XK150S a habitual front-runner wherever it raced. His final build, a black Jaguar E-Type V12 coupe, was always a threat in its class.

A member of HSR, VSCDA and SVRA, Heilman was a superb ambassador for the sport, habitually making time to speak with spectators visiting the paddock and seating plenty of children behind the wheel of his racers. His ready smile and friendly attitude will be missed.
A lifelong farmer with a degree in Agricultural Engineering from Ohio State U., he is survived by his wife Sharon and their five children, 16 grandchildren, two great-grandchildren and two sisters. Services were held June 23.
— Contributed by Paul Gelpi, Burt Levy 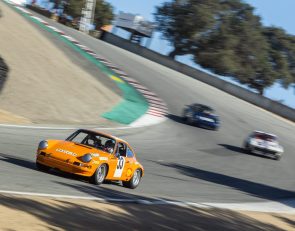