Sherman Oaks, CA — Bill Pollack, one of the founding drivers during the early days of sports car racing on the West Coast, died Sunday (July 16) at age 92.

Pollack began his career in the late 1940s racing an MG, then won the Pebble Beach Road Race twice in Tom Carstens’ famous red-wheeled, Cadillac-powered Allard J2, as well as the Sports Car Club of America-sanctioned 1952 Golden Gate Park Road Races. Driving a variety of other cars including Alfa Romeos, Porsches and Maseratis, he competed in more than 60 races and won at numerous venues, including Stockton, Willow Springs, Torrey Pines, Palm Springs and Santa Barbara.

His autobiography, Red Wheels and White Sidewalls: Confessions of an Allard Racer, features a forward by Carroll Shelby. Now in its third printing, the book earned praise from VM editor D. Randy Riggs, who was asked to be an early reviewer.

Pollack, credited with designing the race course at Willow Springs International Raceway, started The Fabulous Fifties Sports Car Club with fellow racers Phil Hill and Art Evans. Pollack’s daughter, Mellette, said the club is planning a memorial service. In addition, Art Evans is asking that notes and remembrances for a Pollack tribute newsletter be sent to him at agevans@yahoo.com. 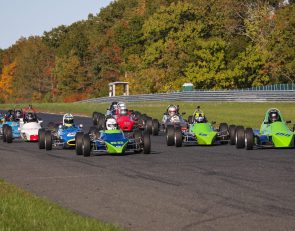